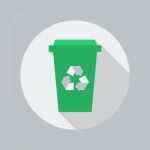 Recycling and re-using are not new concepts - in fact, our ancestors knew how to recycle much better than we do. During wartime, old metal was melted and made into weaponry; old clothing was used for making quilts; historical evidence even indicates that citizens of the Byzantine era used recycled glass. Neither is recycling or re-using a matter of eco-friendliness alone - in places where resources are scarce and people have trouble acquiring new materials, one man's rubbish becomes another man's asset; think of used tyres used to make slippers, an empty soda can becoming an ashtray, and an empty mayonnaise jar becoming a nail container. Recycling, especially, holds much promise. Here are some essential facts about recycling you should know about.

That recycling can make a big difference in saving our planet is already widely understood - very few people have any doubts about its benefits to nature. What is often not so clear is that it isn't just about being eco-friendly; it's also about being efficient, cost-effective, and saving a lot of money in the long run, as waste collection experts like swrjustbins.co.uk will confirm. It's about avoiding big problems that would require big solutions in the future. And it's about personal satisfaction as well. It's about doing our fair share and being proud to do so.