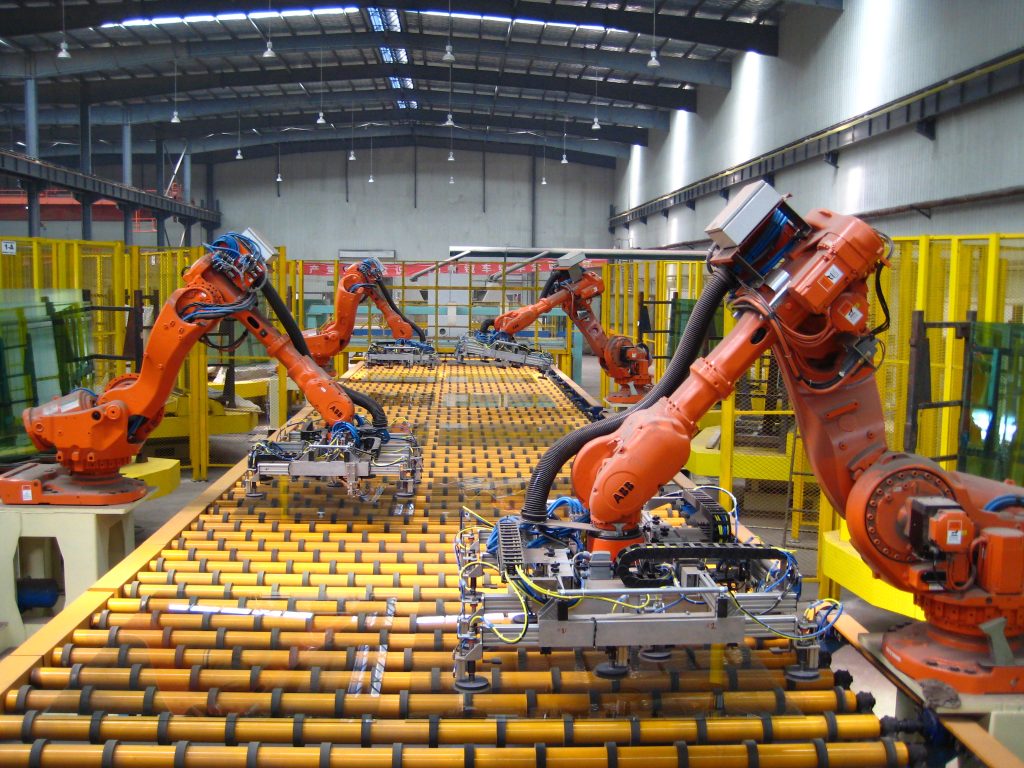 The future has arrived for the manufacturing industry and how they will continue to operate thanks to the advancements in technology. The robotics takeover of the manufacturing industry has long been accepted as inevitable. People have been discussing the replacement of manual labor for decades, but it is only now seeming like a reality more than a fantasy of the distant future. Automated robots are making their debuts throughout many factories, and while they are still seemingly uncommon and more novelty than anything else, their numbers will continue to rise in the coming years. Since their development has reached a point that they’re efficient, and there are enough educated individuals to build and improve upon the robots, automation has become the next logical step in manufacturing.

Robots in the Workforce

The replacement of workers with robots is a move that will no doubt make many uncomfortable. The main concern is the loss of jobs amongst laborers, but this may not be as big of an issue as many believe it to be. Over the course of this process, there are new positions being created for people who would otherwise have been working in the factory. As robot density grows so does the demand for skilled individuals to assist in the development of these machines. Positions that are still young on the job market like a robotics technician or an electromechanical technician will become more and more in demand.

New positions will also open in other industries that will emerge due to the presence of robotics. Robot trading will inevitably find its way onto the job market for instance. This is demonstrated in places like Canada, The United States, Japan, and the United Kingdom, which have all taken the lead in robot “adoption.” They buy and sell these machines from other countries.

These new jobs and robots may, in fact, be necessary for continued growth, rendering these fears invalid. After all, many Western countries like the United States will begin to face labor shortages over the course of the next decade. Deloitte and the Manufacturing Institute report that the USA will be in need of 3.5 million new workers leading up to 2025, with nearly a third of those positions being unfilled due to lack of necessary skilled workers. The current laborers are also nearing retirement with nearly 3 million estimated to be leaving manufacturing by 2025. Birth rates aren’t high enough in many of these countries to sustain the labor force as it currently operates, making automotive robots the logical replacements. Once the necessity of robot automation is taken into account it becomes apparent that they are needed to maintain a high quality of life.

China and the Future of Robots

One country that recognizes the value or robots in automation and seeks to be a leader in this growing field is China. They recently made headlines in their plans to become one of the top ten nations in industrial automation. Their current robot density is 36 automated robots per 10 000 workers but hopes to boost their ratio to 150 by 2020. This is an ambitious goal, as China currently ranks at nearly half worldwide density average of 66. South Korea is leading with a reported 478 robots per 10 000 workers, followed by Japan with 314 robots and Germany at 292 robots. The International Federation of Robotics (IFR) claims that China is on the right track though, saying that 40% of the world’s volume will be there by 2019 and “employ” a third of the world’s robots. To achieve this they need to produce 650 000 over the next five years.

China continues to be a leader even now in robotics despite their current low ranking in density, however. They are the top purchasers of new robots, investing in the future of this industry while doing so. Their nation’s population and human density is also one of the highest in the world, skewing their robot density in the process. A significantly higher number of robots would be necessary to place them in the top 10 than any of the countries that currently rank. Their population also places them in a position that they are able to build these machines on a grander scale. And while the core of their robotics industry is remains manufacturing automation, China is exploring how else robots can be utilized. China is working to develop multiple kinds of robots. They have partnered with Google to create automated self-driving vehicles, and are even currently using drones in rural China to deliver goods to people in secluded regions.