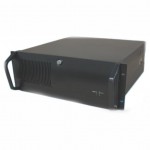 The Industrial Revolution completely changed the way we built everything. What had previously been painstakingly crafted by hand, using what we would now consider rudimentary tools, became much more efficient. The movement was not without its problems; you can look no further than the work of Upton Sinclair for proof of that, but it was a crucial step toward the automated world we live in today.

Much of that world would not be possible without industrial computing. The term might evoke pictures of heavy-duty laptops, or large scanners held by workers in rugged work environments. All of that exists, but industrial computing is commonplace too. Simple microchips and processors capable of performing amazing tasks.

The same kind of pressure control that powers an HVAC system in one's home powers some industrial applications. Pressure control is extremely important, especially in operations like sputter deposition that is used in the manufacturing of eye glasses. These delicate operations not only require precise pressure, they are usually under strict temperature regulations as well. Automated systems track all of these variables by degrees, and more computing power allows these tools to be more precise. These types of Industrial PC boards that are used must have the processing power required to complete these complicated tasks.

The world of international shipping is becoming more advanced year over year, and much of that advancement is occurring in the management of stock. We know the one of the biggest sources for lost revenue in a business deals with breaking the cold chain. The cold chain refers to the cooling required to keep perishable goods safe during transit, the links of the chain being each point in which the package is moved or shifted to another form of transportation. Automated systems combine with data from workers in the field to track packages as they arrive, providing real-time information to manufacturers. This keeps the supply chain active, and helps cut down on financial losses.

The robots are here, they aren't just coming anymore. Not everyone has hailed the coming of automation, but business has embraced it. Automation now powers everything from car manufacturing to moving raw materials. Automation is the ideal replacement for low-skill jobs that are repetitive in nature. These machines are also capable of the kind of precision we see in pressure control, but on a different level. Automation can also assist in the inspection of an item, offering a more accurate picture of the state of a product than the naked human eye.

There is also a growing movement of human-machine interaction dubbed "HMI" or "Human Machine Interface." These systems allow workers some degree of control over larger systems, like the way workers might monitor a power plant. We also see HMI in the corporate world, where there is a great need for data crunching.

GE coined an intriguing term called "Industrial Internet," which promises intelligence in machines. This level of artificial intelligence is unlike what we've created before. You can think of this concept just like you would with an automated or smart thermostat. GE uses this technology to control the levels of fuel a jet engine consumes, similar to the way a thermostat controls the temperature in your home. Except that the GE concept learns through experience. We have some applications that track what we do in our everyday lives, such as Google's Instant Search feature, but industrial Internet promises a smarter manufacturing process through careful automation.

The same kind of computing that goes into the buzzword "Internet of Things" is already applied to manufacturing. Automation and management of a company's workflow is made more efficient through industrial computing systems. Without these crucial components, we might pay a much higher cost for the goods we use everyday.