The UK's sources of energy, and the ways that they are used, constantly change to reflect fluctuations in fuel costs, technological advances, public opinion and the world economy. 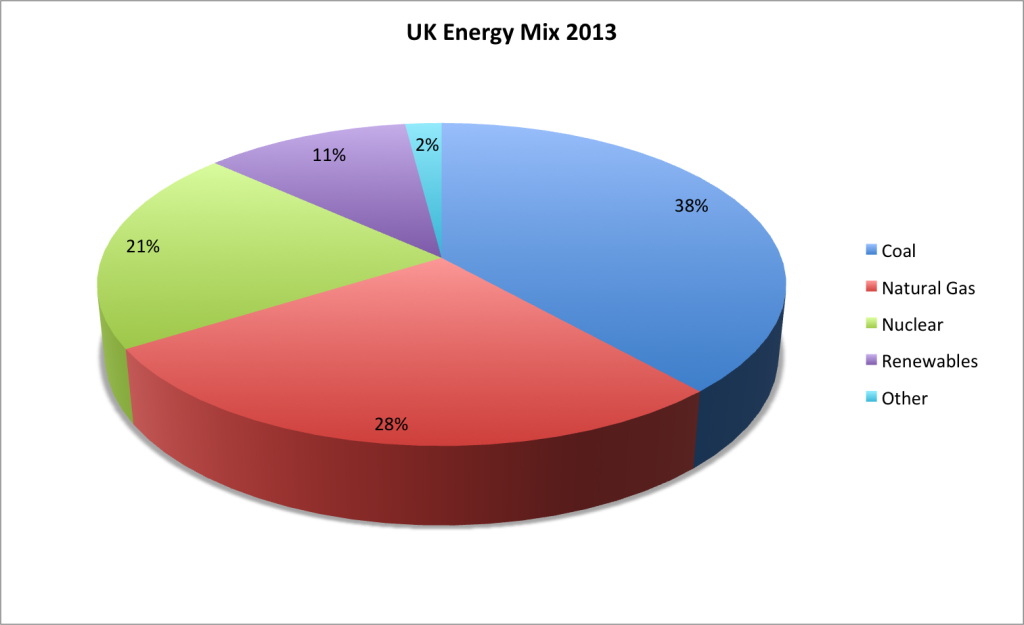 Despite an increase in the UK population of over 63 million, energy requirements have dropped below the levels used in the 1970s; which is due in part to the economy moving away from heavy industry and into the less energy demanding service sectors.

The future presents challenges as traditional sources of fossil fuels start to dry up, there is European legislation to limit the use of traditional coal powered power stations and the existing nuclear infrastructure is quickly becoming redundant. Without new sources of energy coming on-stream the threat of blackouts is approaching reality.

Energy efficiencies are predicted to offset population growth until at least 2030, but what needs to be determined is where this existing demand will come from. For more information on the current consumption of energy in the UK please visit Gov.UK.

The shift in the energy mix since the 1970s has mainly been due to the reduction in the use of coal and its derivatives, coke, and blast furnace gas, a by-product from the iron smelting process. Petroleum consumption has remained fairly constant and increases in the use of gas and nuclear power have made up the shortfall.

There was an initial dip in coal consumption in the 1980s during the miners' strike, followed by a significant decrease in the 1990s, when inexpensive gas from the North Sea came on line. Price remains a factor as recent years has seen this decline reversing due to cheap coal imports becoming available from the US.

Greater efficiencies, in the generation and transportation of electricity, and also end user technology, have been major factors in significantly reducing demand in some areas; domestic use by 12 % and industry by 60%. This has been partially offset by increases of 50% in the transport sector as the numbers of cars and air miles grow rapidly.

The UK's energy sector has been allowed to stagnate through a lack of investment and foresight that has resulted in the current situation. Rapidly rising domestic fuel bills are causing fuel poverty and reduced living standards for many. It is only now that there are threats of power cuts within the next few years, due to existing power stations facing decommissioning before their replacements are ready, that a review of the options is taking place with any urgency.

Some difficult decisions will need to be made by Government agencies that are all potential vote losers, but the alternative is even more unpalatable. The UK's energy sector faces a conundrum, future technology and infrastructure should provide for our requirements but these will require time and a massive investment to put into place, while in the short term, a fix is required that will increase carbon emissions and place unwanted structures in the back gardens of people that are currently campaigning vigorously against them.

The future for the UK

Fossil fuel fired power stations that make use of carbon capture and storage (CCS) are expected to be completed by 2017, although this is seen as optimistic. New nuclear facilities are due online in the early 2020. The problem is going to be how to bridge the gap between old power stations being de-commissioned and new ones starting to generate power at full capacity.

Although the UK's oil and gas production industry was predicted to tail off about now it has only so far extracted two thirds of what is available. Some 20 billion barrels of oil still remain under the North Sea but these will require new extraction facilities to be built and the regeneration of a time worn infrastructure. The extent of shale gas reserves is still to be ascertained but it is estimated to be very significant for our future needs and with a relatively short lead time to production. In addition, some existing coal fired plants have the potential to change to bio-mass powered facilities.

Offshore wind turbines are expected to deliver 30GW with up to 10,000 units being built over the next 10 years and deals with Chinese investors promise to deliver new nuclear power stations, as sites become available.

It is predicted that by 2030 coal will have been removed from the equation and oil will have shrunk to a tiny percentage, while the new CCS plants will be increasing their input steadily. Gas and nuclear power input will remain fairly constant but it is renewable energy that will not only pick up the shortfall but start to dominate in our future energy mix.

A post published on behalf of Mr. C. McDonald. He has a passion for the environment and he writes for LeraBlog and other blogs about the UK and its energy use.