Industries of all types are attempting to “go green” at the moment, falling in line with global calls to curtail the environmental catastrophes which await if climate change is not addressed.

Construction is no different, with sustainability and eco-friendliness being integrated into a number of new building projects completed around the world. Here are just a few of the most impressive examples that are inspiring a new generation of architects and engineers.

Eco-friendly construction is something which needs to be considered as a long term concern, rather than simply as a factor which applies during the actual building work itself.

This hospital in Singapore is an exemplar of this ideology since it was designed and put together to both improve the experience of patients while also minimising the environmental impact of its operations.

Heating and cooling cause the largest energy expenditures and create the biggest costs in a structure of this size. In this case, the majority of ventilation is handled in a natural way, reducing the need to consume electricity to keep the interior at a comfortable temperature.

The exterior of the hospital is adorned with a multitude of balconies and rooftop areas, each of which is decked out with greenery that is irrigated through a clever rainwater collection system and requires minimal upkeep. Estimates suggest that thanks to the way this building is organised, its energy use is almost 40 per cent lower than equivalent facilities. 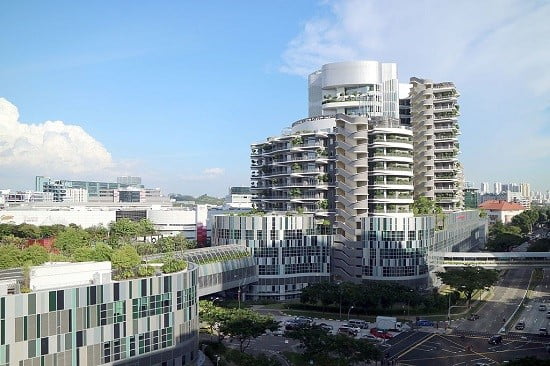 Even from a distance the plant life that adorns the hospital is apparent.

Based in the US state of Virginia, this centre more than lives up to its name thanks to the careful inclusion of systems and solutions that mean it is much more than mere carbon neutral; it actually pumps electricity back into the mains grid for others to use.

From a construction perspective, the Brock Environmental Centre took on the important concept that re-use and recycling are better than harnessing new materials. As such much of the wood, wire rope and fittings throughout come from earlier buildings which have since been disassembled or demolished.

Like many modern buildings, this facility is built to make the best use of the resources that are available to it, including the rainwater which falls in abundance throughout the year. This water is collected, treated and converted to be imbibed by visitors to the centre, reducing the strain that is placed on the state’s supply.

Furthermore, a combination of technologies, including solar and wind power, are used to generate electricity, the vast majority of which is not needed on-site. Four-fifths of the energy that the centre produces is returned to the grid, as mentioned earlier, in a self-sustaining system that makes the surrounding area greener and more eco-friendly. 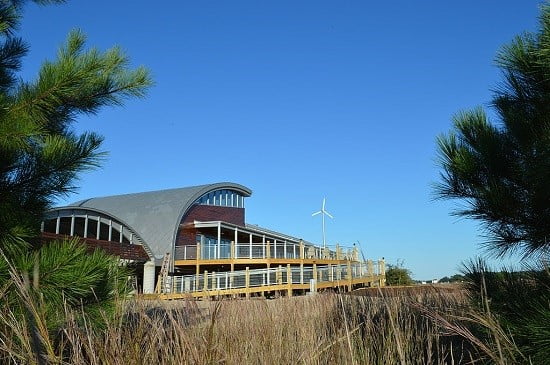 Aesthetics and environmentally positive practicality can go hand in hand.

This modern office building is not just an eye-catching and arresting example of modern architecture; it is also evidence of the fact that even commercial premises can and should be developed with sustainability at their heart.

It cost around £100 million to complete and at the time of its launch was singled out as the world’s most environmentally conscious building.

One asset that makes a difference is the oil-based system that provides both power and heating for the 3000 employees who occupy the office on a daily basis. The oil itself is produced from rapeseed, rather than having to be extracted from the earth. The crop which bears the oil is harvested from land that the organisation which leases the building operates, allowing it to effectively fund its own endeavours.

Efforts to cut energy use within the building are many and varied. The lighting avoids the use of fluorescent or incandescent bulbs and instead makes use of super-efficient LEDs, saving vast amounts each year. Every scrap of waste generated on-site is recycled where possible and in keeping with the theme of other eco-friendly buildings, rainwater is collected and used within the building itself. 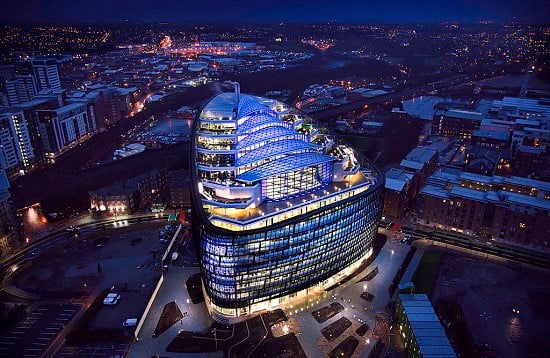 A superb after dark overview of One Angel Square.

Sometimes it is not enough to simply switch to a different, lower powered equivalent of an existing technology to make a building greener. Going a step further and eliminating the need to consume any energy whatsoever while still achieving the desired effect is the ultimate goal of sustainable architecture.

In the case of Manitoba Hydro Place, a passive approach was taken to regulating the temperature and ventilating its hundreds of rooms. Designing a building so that air can move through it without requiring the active use of fans is obviously able to deliver significant savings, yet the innovation extends to other areas. Advanced glazing provides impressive insulation against the outside world, meaning that heat does not escape unnecessarily during the winter, or seep in from outside on hot summer days. The heating itself is provided from a geothermal source, taking advantage of the warmth of the earth itself to beat the chill during cold snaps.

The introduction of roof gardens gives employees and visitors access to green spaces that are in stark contrast with the rigid modernity of the interior. In total it manages to reduce energy consumption by almost two thirds, which is no mean feat for such a prominent building.

One interesting factor about the rise in eco-friendly construction projects is that this has effectively become an arms race, motivated by a desire to compete in an international arena. The upshot is that even projects which might not normally be required to showcase their sustainable credentials are being altered and adapted to jump on board with this trend.

In addition, there is now an increasingly common call for the existing building to have green systems retrofitted within them. This serves to displace the less efficient, ecologically sound solutions of the past and make the adoption of clean technologies almost mandatory. Businesses and organisations can find that their reputations are bolstered significantly if they go the eco-friendly route with any building project they pursue, which is good news for the environment as much as it is for the firms themselves.