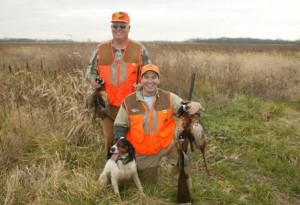 Preparing your hunting land for the upcoming seasons requires a great amount of work; creating food plots, clearing under brush, setting up standsâ€¦the list goes on. Due to the many tasks and much effort needed from this preparation, some people find it unworthy of owning hunting land at all and look to rent every year.

While all this work does seem rather time consuming, meticulous and just downright dull, there are some benefits to owning hunting land. The following is a breakdown of the pros and cons owning versus renting hunting land.

Owning your own hunting land is like having a theme park just for yourself. You have the ability to do whatever you want year after year, control the land and keep others from accessing the property or disturbing your hunting. It's your own little land of solitude. Similar to a man cave, but clearly better.

You get to progress with your land, improve your hunting skills and learn more about the wildlife and their particular travel patterns. It's a great learning experience with a sense of accomplishment and pride from putting all of your hard work into improving your land and hunting skills.

You have the opportunity to add food plots in certain places or adjust the property to the characteristics of the herd, rather than waiting for someone else to do or do it in a way that you don't agree with or particularly like.

One of the major downfalls of owning hunting property is obviously paying for it; a property that usually earns little return year after year and likely doesn't have any cash flow. Not to mention, general maintenance year after year can become a headache for some land owners.

Recreational land although holds value over time, in most cases it will not provide cash flow year after year. It's great for investing and selling down the line, especially since you'll be putting a lot of work into the land, which will improve its worth even more.

In the meantime, though, there is a way to earn some additional cash every season and that's by acting as a hunting outfitter. You can sell hunting trips on your land to make some revenue on the side. This of course takes away from your own personal hunting festivities, which is the downside to this, but it's not like you have to sell hunting trips every year. You can do every now and then, so you'll have some room left yourself. On the upside, though, if others hunt on your land, you can acquire feedback that will lead to developing your land even further and improving it.

The best part about renting is the fewer responsibilities you have, plus it gives you less of a commitment than owning. You aren't married to a property. There are reasons you might not want to own; time restraints, more convenient, less risk or simple uncertainty.

Down the line, if you find the piece of hunting land is not what you thought it was or it lacks the things you want after you get to know it, you can move on to another property the next year with little loss. You can also lease property for a lot less money and risk than you can own, which is perfect for uncertain situations.

The biggest downfall of renting is not always having the ability to do everything you'd like. If there's something you'd like to do, you'll have to contact the owner, which is more of a political process that can be quite aggravating. You can't always control everything that goes along with the property, for example other land tenants (crop tenants), neighbors, trespassers, etc. That's all up to the owner. Before committing to a land rental, understand as much as you can about the owner's renting policies.

There's also no guarantee you will be able to hunt it year after year so management, time, energy and money may be wasted. Improvements to hunting land are seen as investments that can pay off more and more in the future, but if you'll be leaving in a year or so, the benefits won't be worth all the time, money and energy put into it.

SammyJo is author at LeraBlog. The author's views are entirely their own and may not reflect the views and opinions of LeraBlog staff.