It has been recently discovered that a large number of properties in the UK are currently overpriced. Over the last ten years, a significant 31 percent of properties across the country have had their initial asking price reduced before securing a sale. The top 20 towns and cities with the most reductions and mispricings were found to be mostly in the North of England and Scotland, with only three located in South England. Stockton on Tees topped the list with 49 percent, followed by Aberdeen at 46 percent. London didn’t make the top 20 but still experienced reductions and mispricing on 30 percent of their property market in the last decade.

It is predicted that property buyers in the UK can currently benefit from an average discount of £25,000 due to the overpricing. And in London, buyers can expect more than double that reduction at £57,323.

Mayfair estate agent, Wetherell, delved deeper into the research and discovered that the number of properties in the neighbourhood sold so far this year had been exceeded by the number of withdrawals from the market. At 26 sales totalling £83 million, the 30 withdrawn properties are valued at a greater £114 million.

Why is mispricing on the rise?

A crowded property market and very few buyers would be the explanation given by many for the number of reductions and mispricing on properties. However, the current landscape in Britain is quite the opposite, with the upcoming Brexit agreement causing uncertainty among buyers and sellers alike. Vendors are holding out to see what the future holds and, therefore, the number of properties entering the market is at an all-time low nationwide.

Before the internet had the vast userbase it has today, the typical process for selling a house consisted of a vendor selecting an estate agent and that agent taking responsibility for all aspects of the sale, including pricing. Estate agents were also extremely specialised and experienced in their local market, buyer type, and sales trends for the local area – ensuring accurate valuations and confident sales prices.

With the rapid growth of the internet and online businesses over the past decade, however, many vendors are seeking services from online estate agents and search websites. The increased competition and lack of local area knowledge have led to inaccurate valuations and unrealistic pricing in order to secure the client and compete with other agents. Multiple agency instructions have also increased due to this method, and it is now common for the agent who makes the sale to differ from the agent who priced the property – leading to inconsistencies and reductions.

The saturated market and inexperience of local neighbourhoods are clear in sales data for Mayfair in 2016. Of all sales, 45 percent were initially mispriced and had to be reduced before the sale was complete, and 45 percent of sales were instructed by multiple agencies.

Peter Wetherell, CEO of Wetherell, said “Mispricing is deeply unhealthy and extremely bad for the good reputation of estate agency professionals who are experts in their local marketplaces.”

Only 25 percent of property market in Mayfair is priced correctly

Of the 1,047 sales over the last ten years, 245 were initially overpriced. Upon analysing data from LonRes sales trends, it was apparent that an overpriced property on the Mayfair market will typically take 14 months to sell, whereas an accurate valuation will only take between three and six months. In the rare instance of an underpriced property, it was evident that the average time on the market is only one to two weeks. 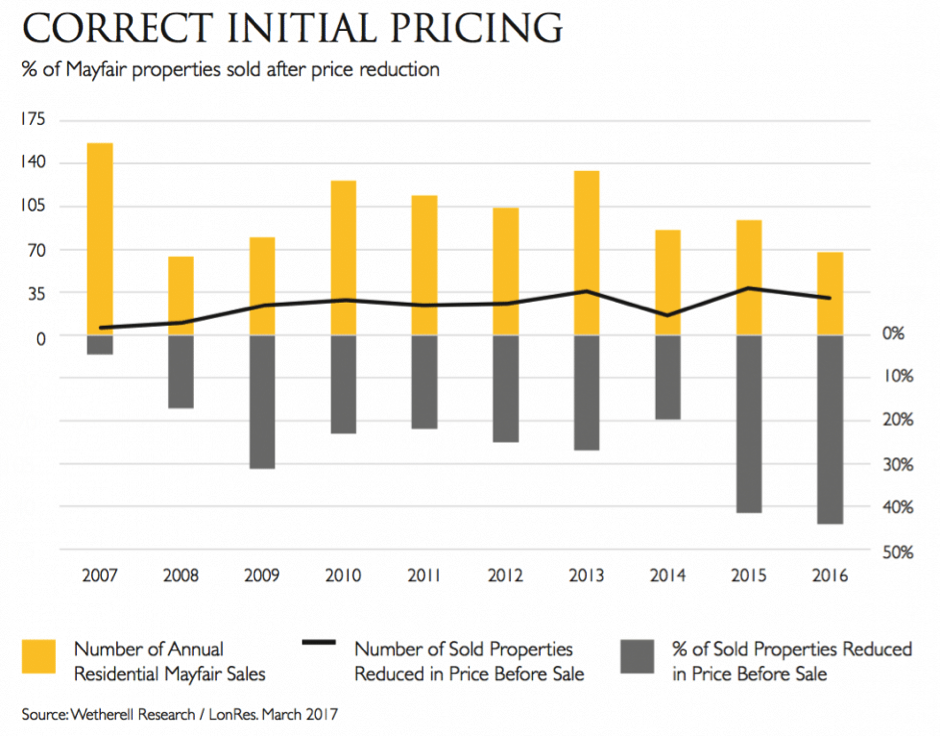 As of March 2017, 70 percent of the 160 properties on the market in the prestigious neighbourhood is suspected to be overpriced, with an average unit price of £4.6 million, this means there is currently £1.1 billion worth of residential property overpriced in Mayfair. Only 25 percent is believed to be priced accurately, and a small five percent is assumed to be undervalued. This inaccurate market has generated slow sales times, decreasing prices, and dwindling trust among buyers and sellers.

Robert Windsor, Development & Sales Director at Wetherell, says “It speaks volumes to us that 80% of the sales in Mayfair over 2015 and 2016 were handled by just two estate agents – Wetherell as the leading specialist boutique agent for Mayfair plus a leading corporate agent. Our local offices have highly experienced senior teams and a deep knowledge of the Mayfair marketplace. When Wetherell is instructed on a sole agency basis, or with another on a joint agency, the property is consistently priced correctly, marketed professionally and sold successfully.”

“However, so many times over the last five years, we have taken on properties which have previously been instructed with other agents or multiple agencies who have a far less knowledge of Mayfair or have slipped into a valuation “price war” in order to please the vendor and win the instruction, and the result has been mispricing and no sale. Eventually, these instructions have come back to Wetherell to resolve. It is interesting to see reports from portals of increasing price reductions – this does not mean that values have come down; merely that the properties have eventually reached their correct marketing price and are in line with local comparables.” 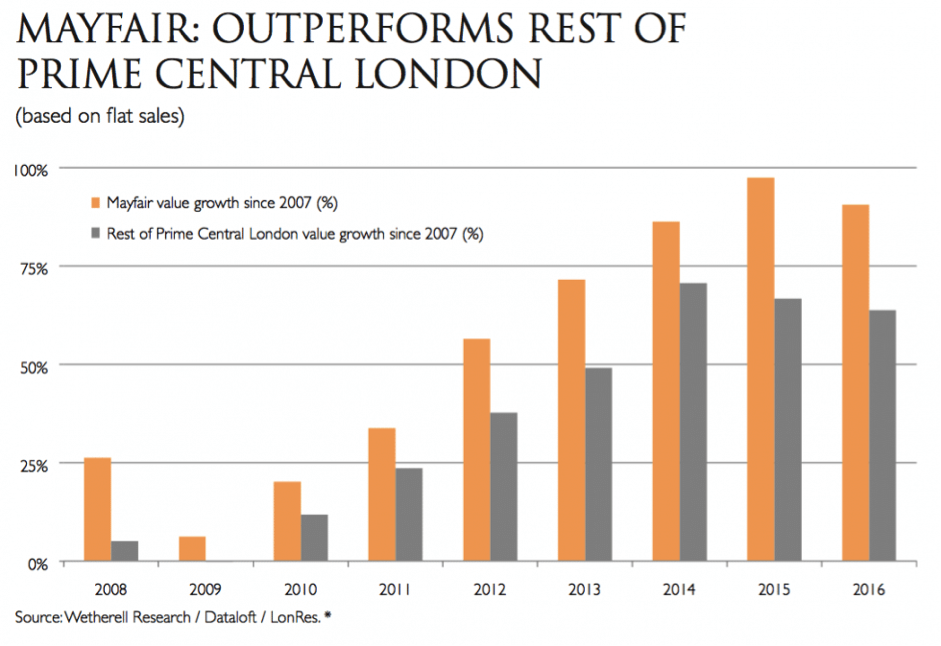 Having outperformed London for the last decade at 90 percent, over London’s 70 percent, Mayfair is expected to continue on a high. The next five years will bring some exciting new residential developments to the area, which are hoped to secure the crown as London’s number one residential area.