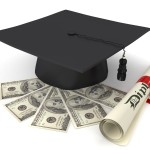 Within the past 30 years, the 20-something experience has changed drastically: today, more kids are going to college than ever before; tuition prices are at an all time high; finding a decent paying job after graduation is a challenge in and of itself because older generations are not retiring as they once were.

Though these issues are common knowledge, Gen Y is still getting a lot of flack from Gen X and the Baby Boomers when it comes to finding a job and repaying student loans. Here are some differences between college and work for Gen X and Gen Y, and why we need to throughout the old school way of thinking.

This was not a steady incline either. In 2007 my tuition for the year at a California state school was $3100. In 2011 tuition for the same school was $5500. Gen X had relatively low tuition that did not see inflation like Gen Y students of today. Not to mention, minimum wage has not kept the rigorous pace of tuition, or cost of living for that matter.

The issue is, that Gen X refers to their own model of how things worked for them when they went to college. The reality is, that it is a whole different ballgame, for the students of today

Government funding for colleges has become sparse in recent times. During the 1980s, 23% of student tuition covered university expenses, while today it's closer to 40%. By shifting the cost to students and their families, many are forced to take out student loans to close the gap. The average student loan debt at the end of 2013 was $29,400. These were numbers unheard of 30 years ago. Most students today are facing 20 years of repaying student debt whereas our Gen Y counterparts only had a fraction of that debt.

With student tuition skyrocketing and student loans becoming a burden, Gone are the days of people finding a job they stick with for 30 years until they retire. According to Forbes, the average worker today stays at each of his or her jobs for 4.4 years.

Older generations seem to think it is because Gen Y does not want to stick it out. The truth is that most millennials are looking for jobs that can help them manage the unbearably high student loans they have to pay back. The average salary for recent 2013 graduates is $45,327. However when you put that in context with the $29,400 student loan average, it's not enough to make ends meet comfortably.

So where are the decent paying jobs? They are still with the same people who applied to them decades before.

With the average retirement age jumping up from 57 in 1992 to 62 in 2013, Baby Boomers are not making enough room for younger generations to fill in. This forces Gen Y to take on any job available to them just to stay afloat. As many as 40% of recent graduates are employed in jobs that do not require degrees. Gen X does not understand this hardship because they have the experience and degrees to go after higher paying jobs.

The fact of the matter is college is becoming increasingly difficult for the average American to afford. With all of this information available, one has to wonder: why are people still going to college? Here is what Gen Y is told to believe: "If I went to college and worked hard then I would be rewarded with a high-paying job that would more than cover the cost of tuition."

The problem is that most teens in high school are fed the same rhetoric that college is the only option to ensure gainful employment. Student loans are sold as necessary debt that one can pay off when they find employment with the help of their degree. But is Gen X preparing students for the realities of current collegiate times?

Jobs are not as easy to secure as they were 30 years ago. They are also not paying as well in comparison to the cost of living. Due to the paradoxes of the current economy, a good amount of students are forced to default on student loans.This is not due to laziness, it's due to the fact that many have taken on way too much debt to be able to repay it while trying to pay for basic necessities.

College is not the same as it was 30 years ago. Millennials do not have the luxury of picking a random major and finding a job immediately after graduation. The job market is packed tight with 3 generations and the retirement age is only increasing. Tuition has skyrocketed and its up to you to make educated decisions on how you are going to finance it.

Look for cheaper state schools and do your research. Start the job search prior to graduation and learn how to market yourself. Make sure that, beyond the benefits of college, you also understand the cost of defaulting on your student loans, the burden of debt, what it take to repair credit, as well as the many other factors instead of just following the advice Gen X has given you.

Student debt is a trillion dollar issue that every student is dealing with. Entering into agreements to borrow tens of thousands of dollars should never be taken on without proper education and consideration (regardless of the benefits presented). This means relying on more than the loose advice that education = success. Remember, how much does your tuition actually cost? Of that cost, what can you cover, what might scholarships cover, what will government aid cover, and what must be borrowed? And beyond all the worries of taking on debt is the prospect of paying it off. Are you going setting yourself up to enter an area of the workforce that that does not have jobs or salaries in line with what you need to stay above your debt???

Most importantly, it is time for us to give up the Gen X dream and start making our own.