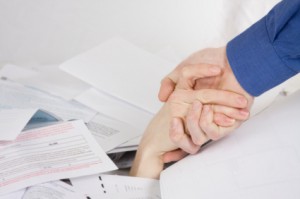 Not long ago the comedian known as Sinbad (a.k.a David Adkins) filed for bankruptcy. ABC News reports that Sinbad failed to pay state and federal taxes in the past and, as a result, was forced to seek bankruptcy protection. This will be Sinbad's second bankruptcy filing, the first one occurring in 2009. Sinbad claims that he owes $11 million, including $8.3 million to the IRS for taxes due over an eight year period. That total only accounts for taxes from 1998-2006, and the total could actually rise considering Sinbad failed to pay state or federal taxes since 2009.

In assets Sinbad lists four cars, home office equipment, and several copies of his published book. Of money owed, he stated that he owes money to everyone "from the IRS to the CA Franchise Tax Board to American Express."

The well-known comedian's struggle with back-taxes is not unique. Many individuals are ultimately forced to seek bankruptcy as a result of money owed to local, state, and federal governments.

How Taxes and Bankruptcy Work

Bankruptcy attorneys are knowledgeable in determining how a bankruptcy may assist a person with income tax issues, though tailored tax advice is often necessary. To begin, one must look at what taxes, penalties, and interest a particular person owes and for which years they owe them. Next, one must consider whether the individual filed their tax returns timely, and whether that individual had been audited or been subject to additional assessment of taxes. The next step is determining whether there has been a tax lien filed, whether accounts have been levied, and if there had been any collection actions.

After reviewing that information an attorney will look to see whether any actions were taken in the past to settle, challenge or pay the taxes (such as an offer in compromise, previous bankruptcy etc.) Learning this information helps the attorney give you advice tailored directly to your situation, including whether the income taxes can be discharged in bankruptcy.

Typically taxes can be discharged in a Chapter 7 bankruptcy filing if the following conditions are met.

Chapter 13 bankruptcies and taxes differ from that of Chapter 7 cases because any taxes that are non-dischargeable in Chapter 7 must be paid as part of the Chapter 13 plan. But only the tax amount itself and interest must be paid; any penalties will not be required to be paid.

Because tax issues as well as bankruptcy can be quite confusing, speaking with a bankruptcy lawyer is critical and may alleviate some of that stress.

Steve Williams is author at LeraBlog. The author's views are entirely their own and may not reflect the views and opinions of LeraBlog staff.