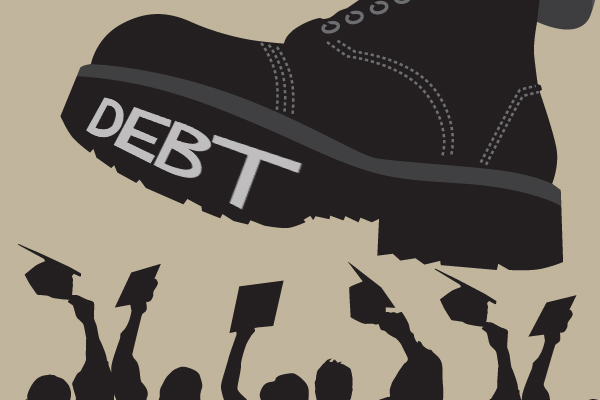 Students study fewer hours today than they did ten years ago and yet are getting higher grades. We like to think that students are smarter these days, but the fact is that earning a degree is getting easier. The only problem is that you cannot explain this to students because all they have ever known is what they have been presented with. It is the same as telling you that the way you drive your car is easy because it was far harder ten years ago. That may be true, but driving is still tricky and drivers that weren't driving ten years ago wouldn't agree it is easier now.

In the US there is around $110 billion dollars of student debt that has been defaulted. That means the country and private lenders need to find their money back from somewhere. Not only that, but 40% of borrowers will never pay their student loans back. [1]

American people owe more in student loans than they do in credit card debt, and private loan companies currently have one trillion dollars of outstanding student debt. [1]

Only 71% of students leave college or University with student loan debt, but the people that do leave with debt are still going to be paying it back in their thirties. What is a little scarier is that half of students in a lot of debt didn't understand the borrowing process. [1]

The Ugly Truth Behind Student Loans

Many students pay down their student loans with credit cards. This is a terrible idea because credit card interest is often very high and failing to pay your credit card bills can result in a terrible credit rating that makes buying a car or a house more difficult in the future. [2]

In 2011, the amount of student debt at any one time reached over one trillion dollars. Now it has increased even further and the amount of people that fail to pay within 90 days of their payment-due date has jumped up to above 12%. That means that over 12% of students with student loans have failed to pay their most recent payment at any one time. [2]

Students are now forced to live with their parents for longer and the average age of a home buyer is going up every year as a direct result of student debt amounts (quantity and overall borrowed amount) increasing nationally. [2]

If you have earned certain degrees, you have wasted your money! Did you major in gender studies, women's studies, ethnicity studies, cinema deconstruction or any current academic fad–you have wasted your money. There are simply too few jobs to ever justify the expense of your degree, they also pay very poorly and the skills are not transferable. A person studying gender studies for example, cannot turn his or her knowledge into becoming a therapist or a care worker. [3]

Your student tuition fees are also far higher than they have to be. They have been rising at four times the rate of inflation. Justifying higher costs is very easy for a university, and getting into student debt is very easy, which has almost forced universities to raise their tuition fees for the simple reason that everybody else is doing it. Asking a university to lower its fees is like asking them to refuse a suitcase full of free money. [3]

Universities are not chastised or punished for having higher fees; in fact they are often looked upon as a better and more exclusive university because of their fees. The truth is you can get an online degree for a tiny fraction of the cost of attending university. The end result is the same, but say you attended a costly university and for some reason it is supposed to be better. It doesn't make you more intelligent or more qualified because you paid $100,000 for your education! [3]

A Little Comfort And Advice

Getting an online degree is easier than ever and so long as the university offering it is legitimate, you can come away with a genuine qualification at a fraction of the price it would have cost if you had gone to college. Also, with online learning you can learn whenever it suits you, so you can have a job and pay off your debt before you finish your qualification. Furthermore, learning on campus makes it difficult to get ahead, but many online degree courses allow you to work through your course quicker so you can get your qualification earlier and get a job quicker.

The sad part is that getting a degree is so easy that there are many people with degrees on the job market. There are plenty of degree-qualified people that are unemployed. However, if you have a degree, you do slightly increase your chances of getting a higher paid job. [4]

The only downside is that whilst you were spending anything between four and seven years in university or college, other people where getting valuable work experience that they can use to get a higher paying job. Still, there are some jobs such as a surgeon for example, that won't allow you to work without a degree, so there are still degrees out there that can help you get a full-time and higher paying job. It is just a case of picking the right one.

Lindafromuk is author at LeraBlog. The author's views are entirely their own and may not reflect the views and opinions of LeraBlog staff.