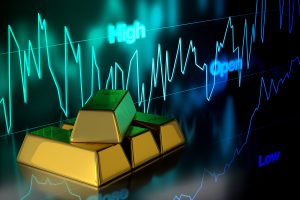 There are numerous reasons as to why individuals as well as institutions invest in gold. However, the more predominant reasons to invest in gold are due to the lack of confidence in currencies and geopolitical uncertainty.

These two factors (currency instability and geopolitical uncertainty) in actual fact encompasses the entire financial system of the world and thus must gold buyers prefer to buy gold and store them as savings instead of keeping currencies in their accounts when economic uncertainties become imminent.

Nevertheless, although gold typically ‘stores’ the purchasing power of the owner, it rarely provides returns in terms of profit and as a matter of fact keeping gold instead of currency has its own set of costs that usually come in the form of storage and insurance – especially when it come to physical gold.

As an alternative many enterprises and individuals opt for electronic gold or paper gold which eliminates the cost factor and offers faster liquidity in the event of a global financial meltdown. Lately however, gold in any other form besides its physical form is quickly becoming unpopular due to the realisation that there isn’t enough gold to go around in the ‘virtual markets’.

As of 2016 according to statistics the total net worth of paper and electronic gold is in excess of 1 quadrillion dollars when in actual fact the total amount of physical gold available is somewhere around 7 and 9 trillion dollars. This aspect has initiated a reverse trend in the precious metals markets as investors convert or liquidate their ‘virtual gold’ which saw the prices of gold sliding despite heavy buying of physical gold.

The selling rally seems to have come to a standstill after the announcement by Great Britain that it will be excluded from the EU.
As an inflationary hedge, gold does its part seemingly well as most investors deem precious metals as a safe haven when economies seem to falter.

For instance when Greece’s credit crisis unveiled a myriad of economical ‘speed bumps’ for the Euro region, it became the primary driver for physical gold demand from Germany which saw the prices of gold rallying to almost 1,200 USD which in turn prompted ‘paper gold’ owners to sell – effectively stemming the rally and pushing the prices of gold back down.

This cat and mouse game between physical precious metal owners and ‘virtual gold’ owners have destabilised the conventional impression that gold is a safe haven as currently due to the immense volume of virtual gold floating in the market – ‘the scarcity’ of gold factor has been greatly diminished, unseating the gold buyers position of being ‘safe’ from inflation to a significant degree.

The reason for this is partly due to the fact that the prices of ‘virtual gold’ are influenced by the global gold market prices, which makes it an influential market determinant of physical gold prices.

Most market punters however still hold on to the belief that when markets come crashing down as they are already seeming to (market repositioning) the re-evaluations would trigger a gold price rally that would balance out their investment portfolio based on the fact that whatever they lose on other commodities will be set as gains in the precious metal markets.

Gold from an economics standpoint

From an economic perspective, gold buyers expect gold price to rise when the demand for gold is higher, but this is not always the case due to the fact even when the demand for gold increases, other market factors take precedence over the precious metal markets. For instance the capital market is almost most certainly the biggest ‘interest diverter’ from the precious metal market.

Largely due to the attractive margins offered by capital markets often cause investors to switch their investments into capital markets as it is seen as profitable entity rather than a ‘safe entity’ as gold is. The capital markets often provide vast returns in comparison to gold and governmental interventions often favour capital market growth more than any other markets due to its relevance to the entire country’s economic growth.

The resultant chain reaction will eventually seep into household spending which would cause the entire economy to become sluggish. It is due to this reason that each time economies move into a ‘sluggish zone’ and investors start moving their funds into the precious metal markets, governments increase interest rates in order to attract investors back into the capital markets.

These interest rate hikes have a tremendous effect on gold buyers as they are left with a choice to leave their money invested in gold and earn no returns or move their funds back into the capital markets and earn returns which could go both ways.

Ravi Sivalingam is author at LeraBlog. The author's views are entirely their own and may not reflect the views and opinions of LeraBlog staff.