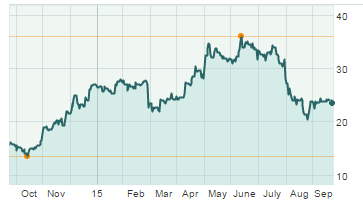 Investors, in general, have been very cautious about the stock market ever since it lost around 10% of its value in the first few weeks of 2016. However, soon afterwards the S&P500 and the Dow Jones started to regain their upward trend almost reaching their late-2015 levels. As we approach the middle of 2016, things have started to look gloomy once again. We are still waiting for the Fed to raise interest rates-which they said they would do when they saw indications of a market recovery-and we are still waiting for that to happen.

Many technical indicators such as the 50 and 100 moving averages show that we are currently in the same pattern we were in the pre-crisis stages of both the dot-com bubble in 2000-2001 and the housing bubble in 2007-2008. Technical indicators are now in line with the current decisions of George Soros, one of the most famous investors in the world.

The selling of U.S. stocks is only one of the four moves that show Soros expects the market to collapse in the near future. Soros Fund Management also went "short" on $431 million in option contracts that track the performance of the S&P 500. Also, Soros bought $264 million in shares of the Barrick Gold Corporation, the largest gold producing company in the world. In fact, his fund became the investment fund with the largest stake in that particular company. Finally, the Soros Fund Management also went "long" on option contracts of $1 million in shares of the SPDR Gold Trust.

It is important to note that this data is up to March 31, 2016. Given the fact that this type of information is disclosed on a quarterly basis, we can't know for sure the exact composition of Soros Fund Management's portfolio to date.

Right now, gold has gone up in price 20% since the beginning of the year. If Soros' prediction is correct and the stock market collapses, gold can skyrocket to record-high levels in the next few months.

In the last few months, Soros has warned of a possible collapse in the Chinese economy which would eventually have an impact on the world economy. He believes that this bubble-type economy which has been fueled by debt can collapse at any moment affecting stock markets worldwide.

Let's also remember that Soros became famous after speculating against the British Pound - which led the "infamous" financial collapse of banks in England in 1992.

Soros isn't the only one buying gold, Barry Rosenstein, founder of Jana Partners which has a portfolio value of $11 billion, has also started investing in this precious metal. He put a total of $5.9 million in this investment.

A stock market collapse provides the average investor with a great opportunity to profit if he makes smart moves. In CFD trading, an investor can take advantage of this. If you think the market will go down, you can go "short" or sell on an index such as the S&P 500 or the Dow Jones. Also, you can go "long" or buy in an asset such as gold since this precious metal almost always goes up when the stock market goes down. CMC Markets is an innovative and user-friendly platform service provider that allows you to trade CFDs through your mobile and desktop devices.