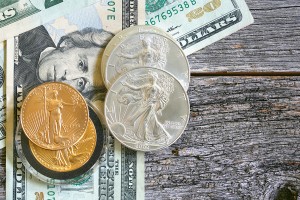 The fact that man has been attracted to gold for eons has not actually changed much, as a matter of fact buying jewellery is still one of the biggest aspects of the precious metal industry on top of exchange-traded funds (ETFs) to gold stocks, physical gold purchases (bullion) and a variety of other investment options that investors are able to choose from with regards to the precious metal. However, the questions have always remained, why gold? Why do people buy gold not only to adorn themselves, but also buy gold as an investment.

Although it may seem that gold has long resigned from being the preferred form of currency ever since the gold standard was dropped and paper currency took over, it does also seem that paper currencies have been losing value at an alarming rate and will continue to do so to the point that it becomes valueless. Even now, when there is the slightest sign of economic crises, investors flock to the precious metal industry to protect whatever wealth they have as gold is and always has been viewed as a commodity that will always hold tangible value and by tangible we mean gold is an asset or commodity as some prefer to refer to it as that has various intrinsic qualities that does not only make it unique but also necessary for investors to hold in their portfolios. However in order to gain a clear perspective on gold and its fundamental values, it becomes necessary to look into its history briefly.

If one intends to truly understand gold and its fundamental purpose it is necessary to look at the genesis of the gold markets which actually began in 3000 B.C a time when the Pharaohs and Queens of ancient Egypt were commissioning goldsmiths (or whatever these skilled craftsmen were known as during that time) to make jewellery. However as gold (and silver for that matter) became popular and more scarce it started being regarded by people as a valuable element due to the fact that it was not easy to come by and even back then people began to realise that it was a scarce metal. In about 560 B.C. gold was actually treated as currency which was a welcomed initiative at a time when merchants were looking to create a standard transferable form of money in place of barter trading that would simplify trade. Strangely enough, gold jewellery was already a preferred form of currency that was being accepted at any part of the world where trades took place and the creation of gold and silver coins that were marked with a certain value seem to be the perfect solution for traders.

As gold started to be used as money its importance continued to grow exponentially and eventually gold become the life line of great empires as they needed them to pay wages for soldiers which was the most important aspect of empires during a time when military power was critical to the survival of these empires which included the Roman and Greek empires. . Around 1000 AD Great Britain started to make its own currency that was based on precious metals mainly silver and gold which eventually become the symbol of not only wealth, but also power throughout not only the European continent from east to west but also Asia, Africa and the Americas.

As time went by in 1792 the United States government established a bimetallic standard which meant that every monetary unit issued by the US government was supported by gold or silver. It was the beginning of the gold standard whereby the money used was representing gold which was stored and one U.S. dollar was equivalent to 24.75 grains of gold. However, the gold standard could not be sustained due to a number of events that transpired in the early 20th century which included the 2 World Wars and the great depression which led to the transition of gold out of the monetary system. The Federal Reserve was formed in 1913 through which promissory notes were issued; these promissory notes were actually currency that guaranteed redemption in gold upon demand by the holder. Following that, the US government introduced the Gold Reserve Act of 1934 which simply meant that the government of the United States of America held title to every single gold coin that was in circulation and ended minting new gold coins. This was a move that established the idea gold was no longer necessary to serve as money. The Nixon shock in 1971 abandoned the gold standard as U.S. currency was no longer backed by gold.

Rolling back to the current times, it seems that the entire world has slowly been reverting back to the gold standard due to paper currency becoming â€˜worthless' and if we were to observe, most emerging economies have started to stock up on gold which indicates that gold might end up being used as currency once again not too far in the future.