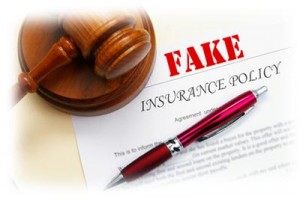 Fake licenses, fake college degrees, and fake car insurance cards-the internet can come up with anything. These days, all it takes to come up with a convincing document are good photoshop skills and a printer, so more customers are falling for fake car insurance companies than ever before. While officials in the United States aren’t sure exactly how widespread these scams have become, police in Detroit busted a major fraudulent car insurance company in early 2013. Most of their clients came from the Detroit area, where car insurance is among the highest in the country-a staggering $4,000 compared to a national average of around $1,500. Police know that policy holders aren’t always innocent. Many drivers seek out these fake insurance cards to avoid such hefty price tags. But doing so opens you up to huge risks if you get into an accident or even get pulled over.

The days when it was more difficult for the police to verify your insurance card are a thing of the past as more and more states have instant verification systems to tell if a policy number is legitimate. Plus, if you used to have legitimate car insurance and the policy lapsed or was canceled, the insurance company will inform the DMV. The DMV will then send you a notice informing you that you need to get new insurance, and that failure to do so will result in your license being suspended. When a police officer pulls you over, it’s easy for them to find out if you’re uninsured. If you try to fool them with fake documents, you’ll need to prove you didn’t know they were fake, or you could end up in much more legal trouble. That type of insurance fraud is a serious offense, and in many states it results in a $5,000 fine and possible jail time.

An even more grim situation than being caught by the police is being in a car accident with fake insurance. Not only have you opened yourself up for fraud charges, you’re also now guilty of driving without insurance, which can be a nightmare. Since your fake insurance company can’t pay for the damages caused by the crash, the driver and passengers of the other car have a right to sue you for the costs. They can be entitled to a portion of your wages and any of your assets, including your home, depending on how serious the accident was. You’ll also be assigned to the Automobile Insurance Assigned Risk Plan for your state, which means you are too uninsurable for insurance companies and will have to pay huge premiums for a number of years-sometimes double or triple the national average. This usually comes after your license is suspended for a year. It’s just a terrible situation.

There are plenty of drivers who did not intend to do anything illegal and simply thought they were finding a great deal online, but then end up the victim of fake car insurance companies. So it’s important to know how to spot these scams. When the quote is too good to be true, that’s usually the first sign, which is why it’s important to shop around and see which price is radically different from the others. You should also make sure you are dealing with a licensed and state certified company that can answer your questions about all the traditional elements of a policy-collision, comprehensive, uninsured motorist coverage, and roadside assistance programs. Sometimes you’ll find smaller companies aren’t completely fake, they just lack the basics and won’t be able to really cover you in the event you need them.

Fake car insurance is a relatively unsophisticated scam and it is usually easy to get caught. Think twice before you willingly participate in a scheme to use phony insurance cards, and make sure you are not skipping on the real research it takes to decide on an insurance company. The cost of breaking the law is always much higher than the cost of simply paying your premium.

Writer Britney Marie Chan blogs for insurance sites. If you want to check on the details on car insurance in Philadelphia, click here.

Britney Marie Chan is author at LeraBlog. The author's views are entirely their own and may not reflect the views and opinions of LeraBlog staff.