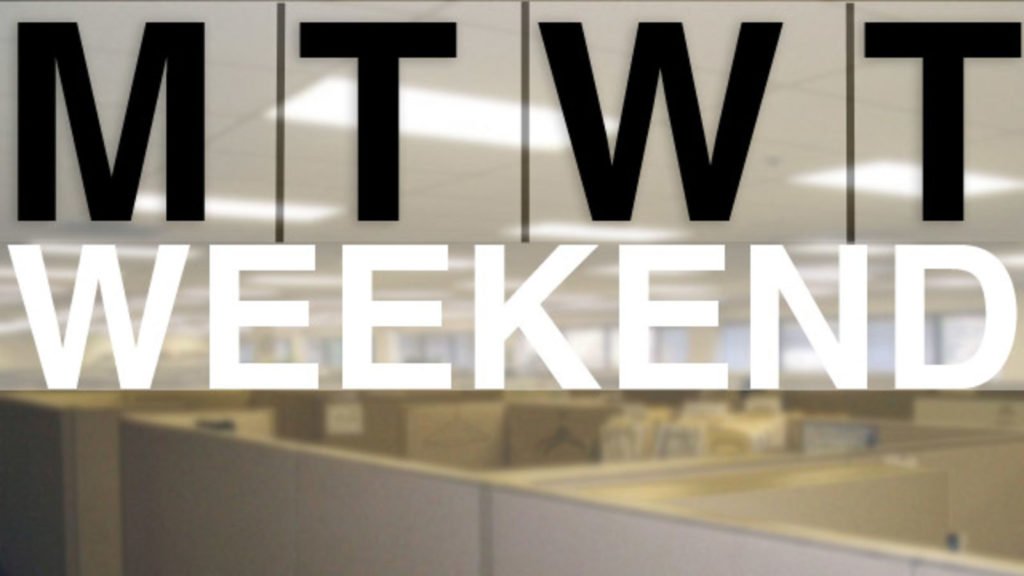 An experiment by New Zealand corporate trustee company, Perpetual Guardian, last year brought four-day workweeks back to everyone’s attention. They concluded that the four-day week was here to stay, and even published a whitepaper to support their argument and encourage others to follow suit.

In the UK, trade union umbrella organisation, the TUC fully supports the move to cut down the workweek, saying that longer working hours don’t lead to better performance or productivity. They found that although British employees work two and a half weeks more a year than the EU average, countries like Germany and Sweden with less working hours still outperform us.

But how effective is this new workweek model?

The pros of the four-day work week: why it’s here to stay.

Here are the reasons why people think it’s now the new way of working.

A 2017 study by money saving brand VoucherCloud revealed that UK employees do less than three hours of actual productive work a day, with much of their time taken up by administrative tasks; reading and responding to emails and attending meetings, as well as small distracting activities until it’s home time (e.g. chatting with co-workers, checking social media). A shorter workweek means that employees are more incentivised to complete work, helping them to focus better and be more committed to main tasks.

It’s well known that high stress levels drastically affect wellbeing and work performance. Fewer days at work mean that employees get more time to de-stress and spend on their personal lives, for example to be with family or pick up a hobby. According to figures released by Health and Safety Executive in 2018, work-related stress and mental illness are responsible for. But by allowing employees more time to unwind, fewer people are likely to take sick leave from ill health caused by burnout, which can be easily tracked by observing absence trends through an online hr system.

Helps win the war for talent

In a competitive labour market, many job seekers look for companies that provide them with the best work-life balance. US businesses like Killer Visual Strategies mentioning their four-day workweek offering on their job ads saw a decrease in time to hire, and so were able to fill vacant positions quicker. Likewise, marketing firm Pursuit Marketing found that they didn’t need to pay for recruitment agencies anymore as offering a shorter workweek resulted in more direct applications.

The cons of a four-day workweek: why it’s never going to stick.

But not everyone is convinced, and some have argued the downsides and impracticalities that make this nothing more than a passing trend.

One of the biggest arguments for the four-day workweek is that it increases productivity. However, across various trials done by companies, there are mixed results. Although many employees are enthusiastic about the idea of four-day workweeks, some are concerned about how they’ll manage the workload. Employers expecting a similar output, but in fewer days, risk causing the opposite of the intended effect, increasing rather than reducing stress among employees. And in companies that introduce a longer working day, employees are likely to disengage in the later hours from fatigue.

Where companies opt to pay employees the same rate for reduced hours, there is a significant cost implication. Perpetual Guardian took this approach, and were able to justify it, but others may not find it so easy. For example, the model was tried out in nursing homes in Sweden, where the work hours were reduced to six hours. But this caused staff costs to rise as they needed to recruit more people to ensure the rota was fully covered.

Not every sector – or every job – lends itself to a four-day week. The practicalities of ensuring continuity and staff coverage in an already competitive market is challenging for many businesses. A shorter week (for less money, or with longer days) doesn’t always work well for employees either. Royal Society of Arts’ director of economy, Asheem Singh, raises the concern that this could create a two-tier labour force, with ‘elite’ and already relatively well-paid white-collar workers in four-day weeks, whilst others continue working five-day weeks.

Whether you choose to implement a four-day workweek in your workplace or arrange other flexible working options, understanding both your organisation’s and employees’ needs should be the top priority to ensure you can create a strategy that’ll bring the best results for everyone involved.