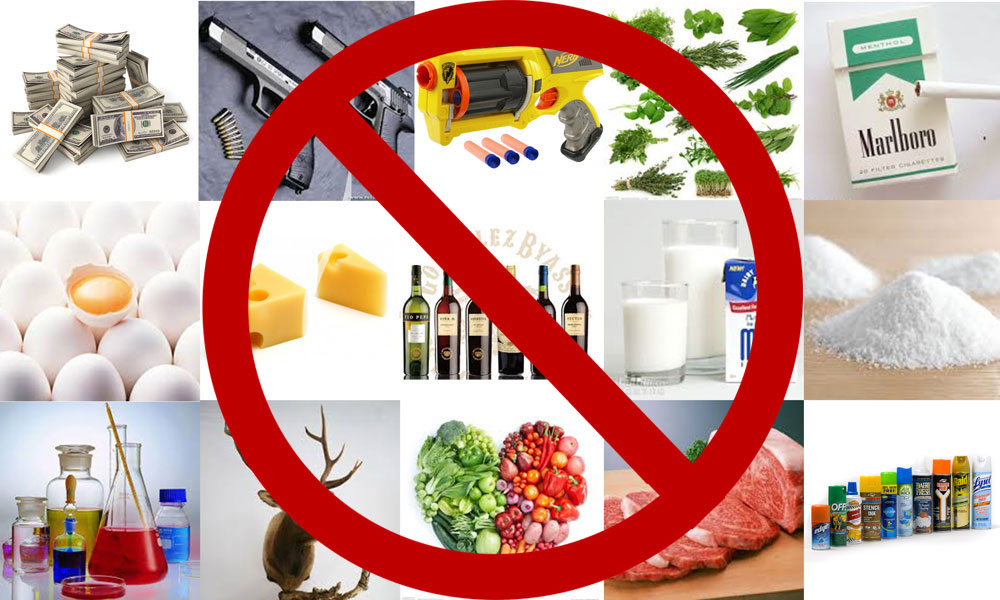 Our global world sees millions of packages traveling to all corners of the earth. Countries have their own customs laws which prohibit certain items from crossing their borders (here are the items banned from crossing US borders). The obvious things are drugs, guns, radioactive materials, knives and other dangerous items… but did you know that these were also banned? As with most things nowadays, and the ease of internet searches – it’s best to check before beginning the process international parcel delivery, as you don’t want your special package being destroyed before it reaches the lucky recipient!

Some countries like Saudi Arabia don’t permit alcohol and in the Ukraine cameras are banned. But it gets more bizarre. We’ve found 8 items that, for various weird and wonderful reasons, are banned in some parts of the world.

When Fijians return from an annual pilgrimage they are subject to a rather unholy restriction on the amount of holy water they can bring back into the country. Customs officials have deemed that any holy water exceeding 1 pint that is not accompanied with a certificate to confirm it’s disease free will not be allowed into Fiji. The reason for this requirement is that the Fijian authorities are trying to control the spread of water-borne diseases like cholera, typhoid, and paratyphoid germs. Thank God for that!

Singapore is one of the cleanest places you’re ever likely to encounter. No one leaves litter lying around, and if you so much as drop a cigarette tab on the pavement you are fined heavily. One of the big problems around the world has been chewing gum, which sticks to the pavement and is almost impossible to remove. Well, since 1991, Singapore has banned it. It can’t be imported, sold or consumed, and if anyone is found with chewing gum in their possession, hefty fines are applied.

You wouldn’t think there could be a problem with toothpaste, but some countries like Algeria are wary of fluoride. It’s a chemical that’s added to most toothpaste brands to help prevent tooth decay. Fluoride has been shown to have toxic side effects including weakened bones and thyroid conditions. In order to protect their citizens, Algeria has not only banned toothpaste containing fluoride but also all other foreign dental products. Now there’s something to smile about!

If your business is selling wheelbarrows, or plastic flowers and you export to all parts of the world, you might want to scratch Nigeria from your list. This West African country does not allow these into their country. At one time or another, Nigeria has also banned ballpoint pens, chocolate and toothpicks!

Some of these decisions do make economic sense though. The idea behind the ban is that if the Nigerian people can’t access goods from overseas – more often than not, at a lower price – they will then have to buy locally made products, thus stimulating the domestic economy.

Similarly, in an effort to boost their own manufacturing industry, Mexico, South Africa and India prohibited the import of matching pairs of shoes. It was hoped that by stopping casual imports from other parts of the world, they’d be able develop and grow their own shoe-making industry.

This ban on shoes is normally only applicable to large, commercial shipments, so if you’re sending a pair of shoes to someone in South Africa, Mexico or India as a present, you should be OK.

Known throughout the world, Kinder Eggs are a much loved type of confectionary consisting of a hollow chocolate egg with a build-your-own toy inside. However, in the USA, Kinder Eggs are prohibited as the toys are deemed to be a choking hazard. Anyone caught trying to smuggle them in will end up having to pay a very hefty fine!

As a now unified nation, Saudi Arabia has banned a number of goods. Some of the odd ones are birthday cards that play music and music in shopping centres – obviously, the Saudi authorities don’t like noise. Their anti-noise campaign has been extended and now includes car horns. Wow, silent traffic jams!

Believe it or not, the village of Vendargues near Montpellier in the south of France has banned clown costumes because of the panic caused by some pranksters who dressed up as evil clowns and scared the locals. The ban is heavily enforced on Halloween. But now the ban is spreading all over France because of other clown incidents. It’s not a laughing matter.