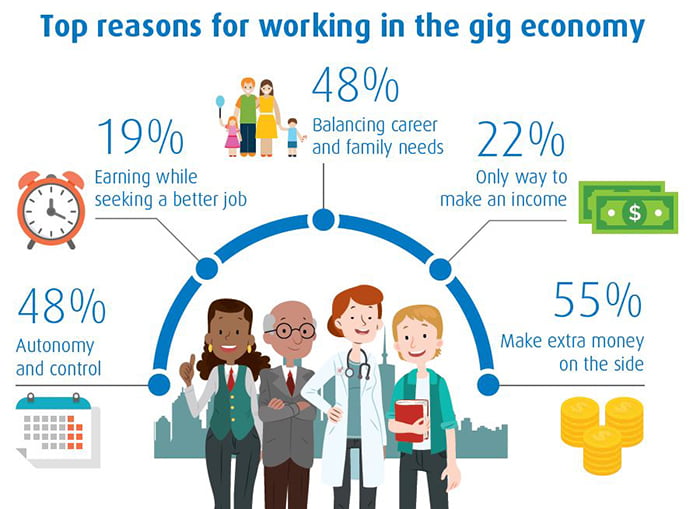 What type of people do gig work? What is the work like? The gig economy is frequently shrouded in myth, with many of these misunderstandings becoming more prevalent during the COVID-19 lockdowns. Here is a closer look at the top five most common mistakes made about what the gig economy is and how it operates.

In 2017, Upwork and the Freelancers Union released a study predicting that freelancers would constitute a majority of the workforce by 2027. While the study is often cited as evidence that gig jobs will replace traditional work, the economic reality is unfolding differently.

For the past 20 years, the number of full-time gigs that workers have held steady is about roughly 10 percent of the total workforce. Another 10 percent of the workforce consists of part-time gig workers, meaning they work a gig job in addition to another job.

These numbers indicate how, although the specific type of gig jobs might change with time, the gig economy remains a relatively consistent part of the overall economy, instead of a substitute for traditional full time work.

Certainly, today’s gig economy wouldn’t exist without smart devices and global connectivity. Examples such as Uber and DoorDash, are  major gig-based companies that require a smartphone for employment and basic operation.

Although technology plays a vital role in all major gig jobs, it’s not the driving force behind the gig economy itself. Instead, today’s gig economy has roots stretching back to the 1970s. The corporate culture shifted towards an emphasis on stock profits instead of production, resulting in a reduction of the permanent workforce in favor of temp agencies and other independent contractors.

“Taxi companies are an interesting example of how a shift in laws resulted in a change to the labor force,” said Hisham Khaki, President of HapiGig . “Until fairly recently, taxi companies were legally prohibited from hiring independent contractors, due to 1947’s Taft-Hartley Act. But a series of legal rulings reversed many aspects of the Act, allowing for the creation of Uber and Lyft, which have business models based around freelancers.”

Although today’s gig economy requires a specific technology to operate, the driving forces behind the shift towards gig work are based on legal and managerial decisions.

In 2018, a report from Deloitte predicted millennials would make up 42 percent of the self-employed workforce by 2020. However, data from the Bureau of Labor Statistics reveals the age distribution for gig workers is in line with the workforce overall.

According to Pew Research, millennials value job security far more than both baby boomers and Generation X. As the generation which entered the workforce during the Great Recession, they value steady employment (and pay) over the uncertainty of freelance gig work.

Many people have the impression that gig work is a reliable source of income when more traditional jobs are not available. During the economic upheaval following COVID-19 and the subsequent lockdowns, freelance gig jobs were promoted as a temporary solution to job loss. However, as the lockdowns continued, freelance work did not turn out to be a reliable source of income for everyone.

Certain gig opportunities did increase, especially food delivery services such as Postmates and DoorDash. At the same time, other formerly-reliable opportunities decreased, such as Uber and Lyft, which saw a downturn in the need for rides, as many potential customers simply had nowhere to go. Interestingly, many drivers shifted their focus from passenger pickup to food delivery as a way to hopefully sustain their income.

In many ways, gig workers are more vulnerable to larger economic uncertainty than traditional employees, a trend that has remained true throughout history. For example, temporary workers were among the hardest hit during the Great Depression, accounting for 11 percent of total job losses.

Major gig work companies often promise a trade-off to workers. What the jobs lack in stability, they make up for with flexibility. The CEOs of both Uber and Lyft wrote a joint opinion piece for the San Francisco Chronicle promoting their business model’s freedom and flexibility. Additionally, Instacart has also publicly promoted its flexible earning opportunities.

However, many gig workers find they lack control over their schedules. For example, a practice called algorithmic management monitors the activity of rideshare drivers. If a driver consistently avoids low-paying fares, receives low ratings, doesn’t work enough hours, or otherwise fails to meet certain metrics, they can end up removed from the system without notice.

Freelance flexibility is more likely in specialized fields, such as a programmer, designer, or other professionals with specific skills. When the gig work requires less expertise, the schedule typically becomes more demanding and rigid.

For workers interested in gig employment, the most important first step is separating myth from reality. While gig work does have downsides, it also has advantages, and understanding the difference between the two is the key to success for every potential worker.