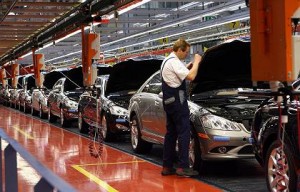 Global auto sales have been growing for a few years now, and are expected to continue to grow for the foreseeable future, but they still haven’t reached the market potential. Sales of electric vehicles have been growing particularly strong, and will increase rapidly for at least 10 more years. This might make it seem like the auto industry has a bright future ahead of it and doesn’t have to worry about some major disruptions further down the road, but there are a few facts that indicate demand for cars can start to drop sharply much sooner than expected.

Although the auto industry is now on the road to recovery after it went through some pretty difficult times when the global financial crisis was in full effect, it should brace itself for another crisis that could be caused by changes to people’s perception of vehicles, as well as specific technological advances. High gas prices, increasing levels of environmental awareness, development of autonomous cars, and decreased interest for owning cars among the young population are some of the factors that pose a threat to the auto industry.

For starters, cars are no longer a status symbol, the way they used to be a decade ago. Nowadays, people are more interested in owning a high-end smart-phone or a tablet and being connected at all times, than owning a car. This applies to the younger generation in particular, which in addition to that, can’t afford to buy cars like previous generations could. The reason is vehicle ownership costs are incredibly high, and young people today are having trouble finding and keeping a well-paid job, which would allow them to buy a car, one of the most serious purchases a person can make. Fuel costs, insurance, and maintenance only increase the cost of owning a car, so it’s easy to understand why increasing number of people are showing less interest in cars.

Competition from car-sharing services is another challenge car makers will have to overcome. Using the services provided by car-sharing companies makes a lot of sense for people who live in urban city centres and don’t need to drive a lot. They either walk to work or school, or use the public transportation systems, instead, so buying a car is simply not worth it for them. In case they need a car for a longer trip or they have to get somewhere fast, they can always get a car that they can find at a location near them, use it for a couple of hours, and then leave it where ever they want. This is much more convenient and cost-effective than buying a car that you will only need to use one or two days a week.

Lastly, people have become increasingly aware of the negative impact cars have on the environment, and the contribution they have in air pollution and global warming. That’s why many people prefer to ride their bikes, walk, or use the public transport to get to their destination. The other alternative is using eco-friendly electric cars, but they are pretty expensive at the moment, and if that doesn’t change soon, cars won’t be the preferred mode of transportation for a lot of people.

These are all factors that car makers across the world have to take into account, if they want to avoid a severe sales slump in coming decades, which could put an and to the auto industry as we know it.

Jordan Perch is an automotive fanatic and "safe driving" specialist. He is a writer for a collaborative community designed to help ease the stress and annoyance of "dealing with the DMV".