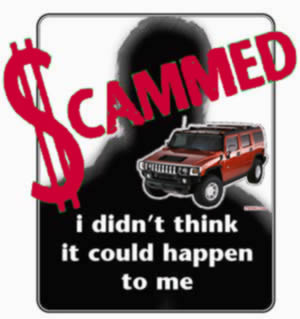 What happens when a car gets jacked? It doesn't go live with its other homeless friends on The Island of Stolen Vehicles. It ends up in the driveway of an unsuspecting buyer who just wanted a new ride. Save yourself the headache-and legal trouble-of buying a pilfered auto by paying attention to these dead giveaways.

The car’s VIN number will either be on the base of the windshield on the driver's side or on the inside of the driver’s side door. If the VIN number is nowhere to be found, there's something shady going on with the car. The VIN also shouldn't look like it's been replaced or tampered with.

Let's say you found the VIN, it's exactly where it should be and there's not a scratch in sight. Run the number through a website like Carfax or the National Insurance Crime Bureau to see if the car's been reported stolen.

Only Cash is Accepted

If you're asked by the seller to pay in cash and nothing but cash, you may be thinking that it's just because this is the most convenient way to make a transaction (for him, at least). Sure, that could be the case. Maybe, though, the seller is trying to avoid leaving a paper trail. By paying in cash, you may not get a receipt or bank documentation of the purchase. Not only do you need proof of purchase, but you also need the title to the car and a way to trace the vehicle back to the person you bought it from.

Just because you get paperwork along with the car, that doesn't mean the forms are legit. Does it look like the seller made up phony paperwork in his home office? If there are misspellings or other strange inaccuracies, odds are that you don't have lawful documents in your hand.

This is probably the most obvious way to tell an honest deal from a shifty one, but does the seller just seemâ€¦off? We're not talking about a college kid who looks like he just rolled out of bed and possibly smoked a joint. We're talking about a person who doesn't have an actual home address, who's had three different cell phone numbers since you started negotiations and who's rerouting e-mails through an international server.

You should also try to recognize when a deal is just too good to be true. You can salivate over the brand new Corvette in candy apple red that you've wanted your entire life, but if the price is way below market value, something’s up. Stolen cars are often sold for much less than they could garner on the legal market because they have to move quickly.

The guy you're buying your dream car from insists that the red, blood-like stain on the backseat is really just melted ice pop from his two year old son. Except, there's some kind of powdery substance in the glove box and you didn't notice any kids’ toys in the house. At best, the blood is from an honest accident and it's going to be a pain to get out of the upholstery. Maybe standing alone, an odd stain isn’t anything to worry about, but coupled with a few other red flags, it could be a major eye opener.