There has always been a high demand for fake driver’s licenses, mainly by minors who want to be able to buy alcohol or cigarettes, but a lot of adults who want to create fake identities for various purposes are looking for fake licenses, as well. That’s why DMVs are doing their best to create licenses that will be difficult to counterfeit, but their efforts are not always successful, as people often find new ways to make fake IDs that look a lot like the originals. However, a new type of driver’s license was recently introduced, that is supposed to be practically impossible to counterfeit.

It was created by the New York DMV, and it’s much different from the typical driver’s license that is issued by DMVs in other states. The first major and most noticeable difference is that it features a black-and-white picture, instead of a color photo. This might make the new license look a bit retro, but it will actually be pretty high-tech. This is one of over 30 new security features that are added to the new driver’s licenses. It’s a grayscale image, that is captured in high-resolution color, but instead of being printed, it is laser-engraved, which is practically tamper resistant, as the New York DMV claims, on the rigid card made of quite durable polycarbonate materials, as opposed to the bendable cards that are issued now.

The next significant change is the way licenses for underage persons will be printed. They will be printed vertically, rather than horizontally, which is how all licenses are printed now. This new, vertical format should help nightclub bouncers, clerks at convenience stores, as well as bartenders, identify underage persons trying to buy alcohol or cigarettes, or get into a club. They will be able to spot people that are under the age of 18 or 21 much more easily and quickly, which will help prevent and reduce underage drinking. In addition to the new format, these licenses will include the date when a person turns 18 or 21, which is another convenient tool for preventing the sale of alcohol to minors.

In a month or so, all DMV offices in the state of New York should have these licenses, and they will start issuing them to those who apply for a new license or a license renewal. In New York, people are required to renew their licenses every 8 years. You will not be required to obtain the redesigned license before your current license expires. 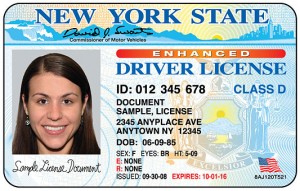 The new style licenses will be produced by CBN Secure Technologies, a Canadian company, that got the $88.5 million contract, which a lot of people think is too expensive, but DMV officials claim it’s going to be worth it, as it will help make licenses more secure, which is an important part of federal homeland security efforts. In recent years, fake licenses have been used for terrorism and other serious crimes, which means efforts for making a high-tech, counterfeit-proof license are quite valid and justified. Also, the new and more sophisticated design doesn’t mean that the new licenses will be more expensive. The fee for a new license will be $64, which is not much higher than the current fee. Waiting times for new licenses will stay the same, as well.

"They are the most secure document of its type in the country," is what Jackie McGinnis, the New York DMV spokeswoman said about the new drivers’ licenses, and she is probably right, considering that they involve many security features that can’t be found on licenses that are issued by other DMVs in the U.S.

Jordan Perch is an automotive fanatic and "safe driving" specialist. He is a writer for DMV.com, which is a collaborative community designed to help ease the stress and annoyance of "dealing with the DMV".