I’m not the type of person to beat around the bush so we’ll cut straight to the point: Yes, they will.

Their only alternative is to helplessly watch as all of their clients, disregarding the longevity of their symbiotic partnership, move on to the online realm, leaving them vacuous and demised.

There’s a wind of change in society, a movement that we are all a part of even though we don’t seem to be cognizant of it.

All of our thoughts, wishes, wants, needs and so on are transcending into the virtual realm.

Nobody pays for magazines or reads the newspaper anymore. 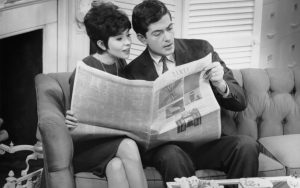 Even your sexagenarian grandma prefers her morning papers in the comforting luminescence of a computer screen and there’s little anyone can do to stop this trend from spreading.

Naturally speaking, this means that websites that catch the reader’s attention at his prime are going to have massive leverage over what these people get to read or imbue.

This gives individual companies a lot of room for experimentation as it opens up an entirely new set of possibilities for monetizing, controlling, analyzing and extracting information from an individual.

Not only that, but those articles are permanent, they continually deliver fresh traffic and lastly, they improve the general outlook an outsider has on the entire company.

But who controls what articles or websites get featured in the upper crust of the ranking positions?

That is why on one hand, many PR firms strive to enter the SEO game and offer their clients an entirely new set of tools to play with. According to Jeremy Diamond, who works with PR /Media Buying & Digital agencies, in a Forbes interview, “The digital space will also become more crowded with a higher emphasis placed on SEO and social media advertising. Content will also play a big role. You see many firms using video elements and guest blogging to communicate with potential clients.”

But the reality of the situation is a lot grimmer and many companies fail to make the transition on their own, instead accomplishing nothing but the destruction of bridges and a steady slide into obscurity.

To prevent this from happening, many such firms turn to SEO gurus and so-called masters of ranking strategies.

While this might have been a great idea in the early 2000’s when every Tom, Dick and Harry could rank a website just by stuffing a few keywords into their articles, nowadays, it is seemingly impossible to see positive trends without copious amounts of work.

Not just any work, as the pitfall of many PR agencies is exactly the naive way they approach the entire ordeal;

By trying to save a buck or two, they taint the good name of the company that had the misfortune of dealing with them. An ignoble example being the shooting of thousands of low-quality links that point to the clients website.

As previously stated, this might have been a valiant effort a few years back, but the game is changing, and the players must too.

Any SEO specialist knows that quantity means nothing to Google anymore and that one would rather see one high-quality link from an authority website than literally thousands of fusillades of spewed garbage.

If you thought this to be the worst sin of them all, you haven’t heard half the story;

As PR agencies are mostly inexperienced in this realm, even when the opportunity presents itself to score a link that would skyrocket them to the top of the search positions, their inaction simply spoils the broth.

Still aren’t sure why these backlinks seem to be on everyone’s lips?

Consider the fact that a brand that has never before seen the light of day, can and will outrank a longstanding website if their backlinks are at their finest.

Getting one of these without any connections is a daunting task and to not sugarcoat things, impossible for most PR companies.

Within the SEO agencies, there seems to be a divide on approaching the entire ranking game.

Some prefer the ‘churn and burn’ style, where domains and entire websites are nothing but playthings to be worn out and tossed into the rubbish.

Others prefer to go for the long haul, patiently building their links one-by-one and taking it easy.

My personal preference has always been slow and steady as it was evident from the start that Google wouldn’t just let these mishaps go unpunished.

What’s really ironic in this entire conundrum is that PR firms that wish to employ the latter, safe and secure, strategy often fall prey to the wolves that treat websites as disposable trash.

Such companies resort to PBN’s, recycling or do-follow comments which simply do not have any value in the current year!

Quite conversely, a PR agency should strive to open communications with other websites, allowing for the interpolation as well as the intermingling of two related sites, benefiting both of them.

Next in line would be keeping your personal expectations in check;

You can listen to as many lullabies claiming to be able to rank for any keyword at the drop of a hat, but that doesn’t change the cold and harsh truth- It doesn’t work that way!

What’s surprising to see is that some SEO agencies have seen beyond the surface, preparing for the inevitable carnage once Google started tackling spammers and cutpurses seriously.

They assembled their forces and built a software that would serve as a buffer to the entire link-building strategy.

All things considered, we can see how quickly the Internet took people by storm, forcing PR firms and many other agencies to adapt or perish.

I see a future where PR in itself become more accessible to the common Joe as prices inevitably plunge as a reaction to the death of traditional broadcasting means and the steady surge of online outreaching strategies.

ivanserranogsm is author at LeraBlog. The author's views are entirely their own and may not reflect the views and opinions of LeraBlog staff.